Exclusively: Large selection of webcams only with us. 47 The webcam is located at Vrbatova bouda behind the Zlaté návrší at an altitude of 1400m.

In the image of the webcam in front of you you can see the majestic Kotel, whose altitude of 1435 m above sea level makes it the 10th highest mountain in the Czech Republic. In the past, it was also called Krkonoše or Kokrháč, German Kesselkoppe.

On the slopes of Kotle, there is also a mystical pilgrimage site "Růženčina zahrádka " with a mysterious circular rampart made of stones.

The very top of Kotle is inaccessible, because it lies in the first zone of the Krkonoše National Park and no hiking trail leads to the top.

Vrbatova bouda was opened in 1964. It is named after the famous skiing competitor Václav Vrbat from Mříčná, who tragically died here during a 50-kilometer international ski race together with his friend Bohumil Hanč from Hrabačov near March 24, 1913.

The name of both competitors is also borne by the nearby Mohyla Hanče and Vrbaty, which stands on a hill near Vrbatova bouda. It is not visible in the webcam image, but it is located on the right side of the image.

The mound was built in 1925, reminiscent of this act of humanity and devotion.

Trips to the Hanče and Vrbaty mounds have been described: here a summer trip and here a winter trip.

It is not possible to stay permanently at Vrbatova bouda, it is a refreshment and catering facility. U Vrbatovy boudy is a bus stop, which is open only in the summer season. Timetable here.

The link to this webcam was provided by Hydronet - Železný Brod. We deserve our big thanks for the good cooperation. 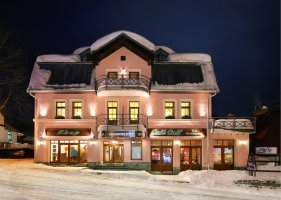 6X Polish side of the Krkonoše